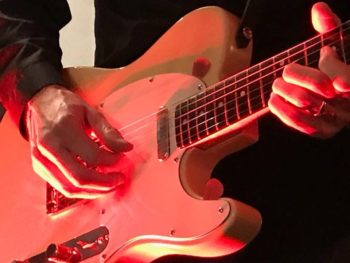 Ruby Muse is UK singer-songwriters Jools Heyes and Malcolm Heyes. With the release of this 3-track EP they get to showcase the sound of their next studio album. The Just Like You EP is the duo’s long awaited follow up to Red Guitar In A Blue Room (2011), and though previously unaware of their music it didn’t take me long to become hooked. Track two on the EP, “Diamonds” contains an urgency and infectious feel while “Winter Hellebore” is steeped in a mystical hue… more arty than sharp edged, it has a rare appeal. You could likewise direct the same towards “Just Like You”, only here Jools’ vocals guided by keyboards and hooky rhythm, harmony vocals and steel guitar poses the feel she is on a mission… with her vocals becoming more impassioned every second – the regal beauty of her voice exudes much soul. I can’t wait to hear the full extent of their music when the full-length release drops through my letterbox. Maurice Hope

Liverpool Sound & Vision… For Ruby Muse and their new EP Just Like You, the feast of the Muse is precious… she allows you to tuck in to three songs that get the mouth salivating and crumbling with delight at the thought.No chasing down the insubstantial rainbow, for this Muse is as solemn as the band suggest – the sound is cool and significant – and throughout it all, has nothing but good vibes that are unassuming but ferocious in their depth.That Jools and Malcolm Heyes can place layer upon layer of silver laced songs filled with an edge of Americana and the gentle repose of love throughout is to be admired, the laid back and the earthy all sharing the same responsibility to the listener… one that is truly satisfying, gracious and completely accessible, even to the first time listener.When the Ruby Muse calls and tells you she wants to be ‘Just Like You’, take it as a compliment, for in her way, she is offering something that is steeped in equality, humility and style; it is the greatest compliment of all. Ian D Hall… Liverpool Sound and Vision Rating ****

Noizze Magazine MMXIV…Just three songs long, this new EP from Ruby Muse features tracks from their next full studio album. It’s a small taste of what is to come – a taste you’ll be craving from the first. The title track ‘Just Like You’, has a sultry lo-fi rock sound – lofty and smooth with wonderfully poetic lyrics. The guitar adds elements of alt-country, while the keyboard gives it a more modern indie sound… perfect to soothe you after a particularly rainy day (literally and metaphorically). Track two ‘Diamonds’ is an understated bluesy song with an enticing rhythmic build. It’s about the ‘unsung’ heroes who make our world shine and Jools’ voice fits it perfectly… sultry and smooth. The last track (I’m so sad that there are only three!) is a beautiful love song with an airy sound. The lyrics are poetic, on the need for inspiration to keep on going. Rich with bluesy vocals and a simple recurring guitar riff; the shimmer of the tambourine in the background adds a strange sense of recognition to the feelings expressed. This short EP is deliciously beautiful and emotive – I only wish there was more. The indie sound is distinctive and addictive… so hard to pin down, borrowing from so many different genres while keeping its own individuality. The word ‘sultry’ is the best way to describe it – it really reminds me of a favourite artist of mine, Sam Philips – and that is high praise! I cannot wait to hear the full length album! Maddy Glen

RUBY MUSE live… Last night I had the great and totally unexpected pleasure of being introduced to the wonderful music of Jools & Malcolm Heyes, who perform as RUBY MUSE. Playing a featured set of their own songs they were, from first note to last, the most perfect and mesmerising act I have ever seen locally. I bought a couple of their cds without hesitation and played one loud on the way home – taking a bit of a detour so that the journey took two or three tracks longer. They very kindly agreed to be our special guests at a live music session in Tilbrook – we had a great night! Tim Copping

RED GUITAR IN A BLUE ROOM

R2 Magazine… Emotionally charged and atmospheric songs that grow in stature on each hearing.

Get Ready to Rock… RUBY MUSE Red Guitar In A Blue Room touches down on a range of styles including country, folk, jazz, blues and rock, and the quality control is set high throughout with some nice vocal work and plenty of neat guitar lines… as Sly Stone might have said ‘It’s a quality affair’.

Blues Matters… The eleven enticingly original numbers here caressingly embrace a wide spectrum of sounds and genres – ranging from a swooning rich echoing sound that feeds on an alternate country style, merging of tranquil solitude and the rather refreshing brusqueness of the English countryside with the Americana of the open prairie (or even, the dense dark backwoods) accentuating the nuances and quirkiness of traditional English acoustic Folk-Rock ; a fine example of this is the arching, escalating ‘Zeppelinesque,’ The Climb, while also creating with Reverie (Blue Room Mix),  a sublime blues thread that is embroidered with an aching and lilting violin Jazz breeze. Overall a softly floating other worldliness is created by Jools huskily ephemeral vocals – especially so on the stinging ringing steel guitar-laden Can’t Figure You.  The mandolin led The Painter, adds an almost courtly feel to the proceedings.  The lush, rich-sounding violin and acoustic guitars that wend and wind through your mind evoke a magical mysterious atmosphere. The lazy Mr Horizon, is a very late night smoke filled slow Jazz fuelled candle burner. The album finishes with Cats Whiskers, an urging swinging violin, harp and fuzzy guitar led footstomper, sadly though as soon as you get into it… it’s gone. Indeed, a very, very interesting album.

Electric Ghost… Red Guitar In A Blue Room is the second album from Ruby Muse; a duo that hails from the heart of the British countryside and offers arrange of songs inspired by folk, country, blues, jazz and even classical music, whilst retaining one electro-acoustic sound that defines them. The opening track Cheat is a number that showcases some great vocal harmonies and well placed electric guitar, held together with a solid rhythm. Hints of southern rock are even detectable in this track, thanks to the bluesy slide guitar that winds between verses and choruses, courtesy of rock and blues man, Malcolm Heyes.  Red Guitar In A Blue Room also features some predominantly country songs too; Can’t Figure You being one of these.  Mr Horizon proves to be a particular highlight, with its laid-back lounge jazz style, interesting chord inversions and soothing melody. All the songs that feature on this album are, in some way or another, stories and are told fantastically with Jools Heyes lyrics intriguing and urging the listener on. Cultural influences are drawn on throughout the album too, with inspiration coming from Vermeer’s Girl With A Pearl Earring painting – and like any good poet, Shakespeare. Red Guitar In A Blue Room is an electro-acoustic album, sometimes reminiscent of Stevie Nicks-era Fleetwood Mac and draws inspiration from a number of different sources, both musically and lyrically… the whole record proves to be very easy-listening and very pleasant and will no doubt please listeners that are already fans of the genre.